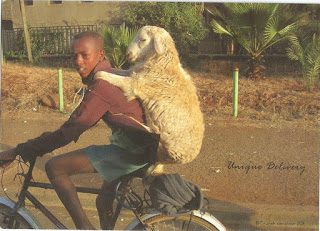 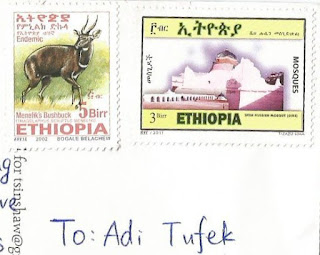 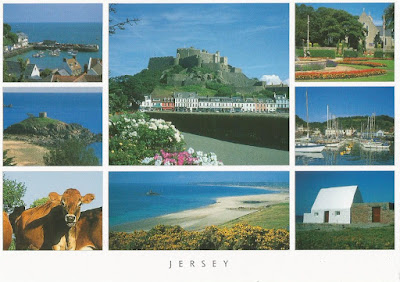 Jersey, officially the Bailiwick of Jersey, is a possession of the Crown in right of Jersey, off the coast of Normandy, France. Jersey was part of the Duchy of Normandy, whose dukes went on to become kings of England from 1066. After Normandy was lost by the kings of England in the thirteenth century, and the ducal title surrendered to France, Jersey and the other Channel Islands remained attached to the English crown. Nowadays, it's a self-governing parliamentary democracy under a constitutional monarchy.
Scholars variously surmise that Jersey and Jèrri derive from jarð (Old Norse for "earth") or jarl (earl), or perhaps a personal name, Geirr ("Geirr's Island"). The ending -ey denotes an island. 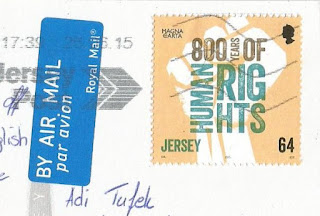 Thank you, Sabrina, for my very first postcard from Jersey and such a powerful stamp on the back!

Email ThisBlogThis!Share to TwitterShare to FacebookShare to Pinterest
Oznake: Jersey 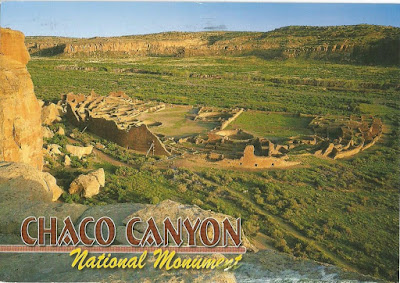 There's no doubt this is one of my American favourites in my collection! The aerial view over the Pueblo Bonito Ruins gives you a feeling how the native Americans lived. Pueblo Bonito  is the largest and best-known great house in Chaco Culture National Historical Park, northern New Mexico, was built by the Ancestral Puebloans, who occupied the structure between AD 828 and 1126. If you're wondering who the Ancestral Puebloans were - they were an ancient Native American culture centered on the present-day Four Corners area of the United States, comprising southern Utah, northeastern Arizona, northern New Mexico, and southwestern Colorado.
Examination of pack rat middens revealed that at the time that Pueblo Bonito was built, Chaco Canyon and the surrounding areas were wooded by trees such as ponderosa pines. Evidence of such trees can be seen within the structure of Pueblo Bonito, such as the first floor support beams. Scientists hypothesised that during the time that the pueblo was inhabited the valley was cleared of almost all of the trees, to provide timber for construction and fuel. This, combined with a period of drought, led to the water table in the valley to drop severely, making the land infertile. This explains why Pueblo Bonito was only inhabited for about 300 years and is a good example of the effect that deforestation can have on the local environment. The Anasazi, no longer able to grow crops to sustain their population, had to move on. This is just one of the numerous examples how much we can lear from the past, but somehow we tend to do the same mistakes as our ancestors.  Thank you, Connie :D 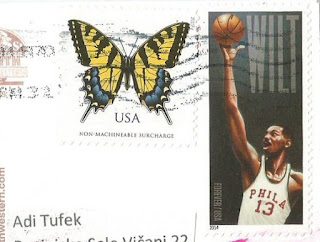 Email ThisBlogThis!Share to TwitterShare to FacebookShare to Pinterest
Oznake: USA 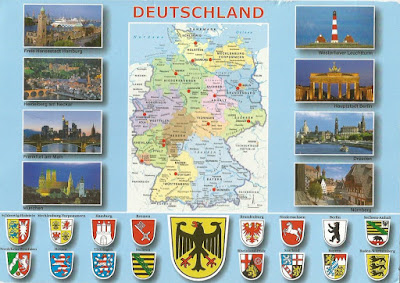 Germany comprises 16 federal states called Bundesländer which have their own constitutions. The postcard shows the map of Germany with federal states in different colours and all the coats of arms. 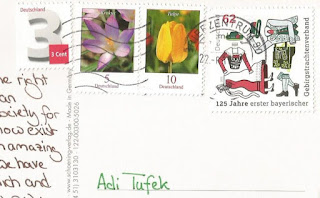 Email ThisBlogThis!Share to TwitterShare to FacebookShare to Pinterest
Oznake: Germany 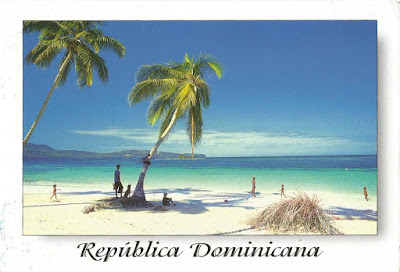 With a heat wave hitting a big part of Europe, I'm sure thare's a lot of us who wouldn't mind a few days on the beach in Dominican Republic. Thanks to my sis for the postcard :) 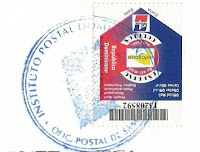 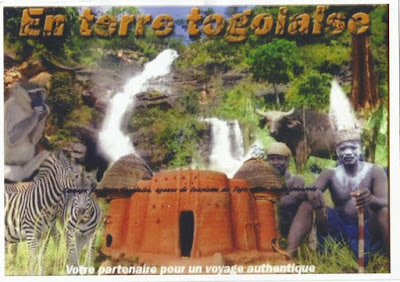 Fortuna has undoubtedly been on my side lately since I've received so many postcards from exotic places, one of them being my very first card from Togo. Togo, officially Togolese Republic, is a small county in West Africa that gained independence from France in 1960.
It's a tropical country with the population of approximately 6.7 million. French is the official language of Togo and is the language of commerce, but many indigenous African languages are spoken across the country as well. 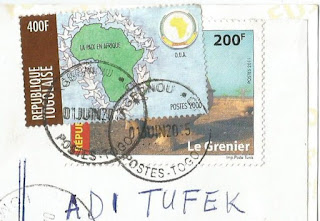